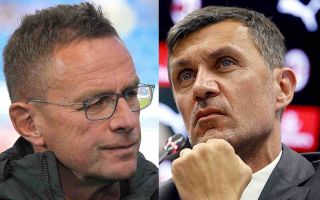 GdS: Elliott and Gazidis approved Maldini’s attack on Rangnick – the reason why

All those in charge at AC Milan were aware of the comments Paolo Maldini was going to make regarding Ralf Rangnick, according to a report.

Maldini spoke to ANSA on Monday, and Milan’s technical director expressed his thoughts on Rangnick’s latest statements, causing a few eyebrows to be raised.

“Before learning Italian, Rangnick should learn respect,” said the former captain in response to the German, who made it clear that he wanted full managerial powers.

Today’s edition of La Gazzetta dello Sport (via MilanLive) has explained the reasons that led Maldini to make these statements.

Maldini had informed the club about the fact he was going to do the interview and the contents of what he said was not a mystery. The club therefore, form Elliott to Gazidis, knew everything.

The paper writes that Maldini told those closest to him that he did it to protect the club and the team because he considered Rangnick’s statements destabilising. He therefore chose this path to avoid compromising the season to end.