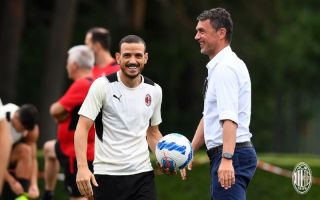 GdS: Florenzi will be on the bench for Milan’s opener against Sampdoria

Alessandro Florenzi was announced by AC Milan yesterday and he could make his debut for the club already on Monday. He’s expected to be on the bench for the Rossoneri’s clash against Sampdoria, a report claims.

According to today’s edition of Gazzetta Dello Sport (via MilanNews), Florenzi is a player that is used to playing at a very high level and above all, he always wants to play. Therefore, despite just two training sessions, he should be called up tomorrow.

Davide Calabria and Alexis Saelemaekers will start on the right-hand side as usual, while Florenzi will study the movements of his teammates from the bench. If there is any need, he could be brought on from the bench by Stefano Pioli.

The 30-year-old admitted that he isn’t quite ready for 90 minutes yet but an appearance off the bench certainly shouldn’t be ruled out. Given his versatility, he has a bigger chance of getting some minutes.