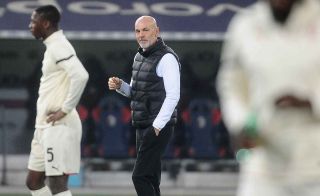 GdS: From scepticism to certainties – Pioli the architect as Milan continue to rack up records

There were multiple positives to pick out from AC Milan’s win against Roma on Sunday night at the Stadio Olimpico, a report claims.

La Gazzetta dello Sport (via MilanNews) talks about the ‘phenomenal’ performance from Zlatan Ibrahimovic, the ‘monstrous’ display from centre-back Simon Kjaer as well as the ‘strength’ of Kessie, Bennacer and Tonali in the middle of the field.

Then there is head coach Stefano Pioli, who has proven to be exactly the right man that Milan needed to emerge from the ‘quicksand of the carelessness’ after the tenures of Montella and Giampaolo. Pioli is the tactical architect of Milan’s recovery but he has also done a fantastic job in the dressing room from a psychological point of view.

He is the symbol of this hard-working but talented Milan, who continue to break records with their impressive run of results in the league. He has certainly had criticism throughout, but it has made him stronger and now the Rossoneri can reap the benefits.