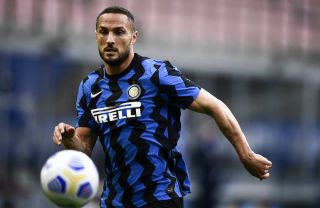 GdS: Full-back frustrated with Inter and could leave – Milan among possible destinations

AC Milan are one of the potential destinations for Inter defender Danilo D’Ambrosio who could leave on a free transfer, a report claims.

According to the latest from La Gazzetta dello Sport (via MilanLive), D’Ambrosio is seriously considering the possibility of leaving Inter because he is frustrated at the lack of clarity over his future. He believes that he has always shown dedication to the Nerazzurri shirt, but he does not like the attitude of the club who are continuing to stall over whether they will extend his contract.

There are teams ready to take advantage of the situation to potentially land him on a free transfer too, such as Milan, Roma, Fiorentina and Monaco – all welcome destinations for the player – but staying in Milano the solution that may interest him most.

D’Ambrosio would be the new deputy to Davide Calabria under Stefano Pioli and would replace Diogo Dalot, who arrived on loan from Manchester United and whose future is still uncertain. The Italian meanwhile has a salary of around €2m net per season, so it wouldn’t weigh heavily on the budget.