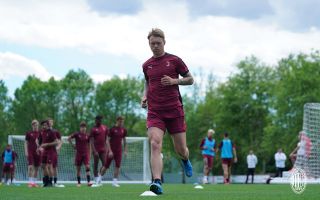 AC Milan are preparing for their huge game against Atalanta on Sunday by trying to bring the group as close together as possible.

As La Gazzetta dello Sport writes, there are a lot of talking points heading into the game in Bergamo, during which Milan’s top four fate will be decided. Which Atalanta will play against Milan on Sunday? Will they be focused and determined to hit second place? Will they be tired and angry with Juve after the Coppa Italia final defeat?

Nonetheless, head coach Stefano Pioli only has to worry about his team without expecting gifts from other teams. The coach’s first mission is to raise general morale, after the match-point wasted against Cagliari. The second is purely tactical in choosing the most suitable players to put La Dea in difficulty.

With the management present at Milanello in the most delicate moment of the season, instead of the usual lunch at the restaurant indoors there was an outdoor grill with Maldini, Gazidis and Massara.

Then there are the training choices such as whether to field Brahim Diaz in the starting eleven again or whether to go for Rafael Leao. The coming days will be decisive.