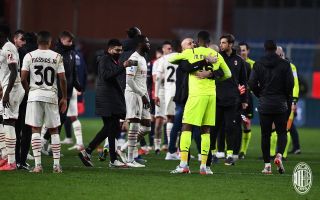 Junior Messias was the man of the moment for AC Milan again as he scored a brace to fire his side to a 3-0 win over Genoa last night.

This morning’s edition of the paper La Gazzetta dello Sport (via MilanNews) has the player ratings for the Rossoneri and they have determined that Messias was the best player on the field, giving him a score of 7.5 out of 10 as he netted a double either side of the break and showed a real clinical nature.

In stark contrast to the last two league games against Fiorentina and Sassuolo, a batch of players received big praise too as Mike Maignan, Sandro Tonali, Brahim Diaz and Zlatan Ibrahimovic each received a 7.

The performances of Pierre Kalulu, Matteo Gabbia, Fikayo Tomori and Theo Hernandez were also positive as the newspaper gave each of them a rating of 6.5. Franck Kessie and Rade Krunic got a 6, as did substitutes Pietro Pellegri and Tiemoue Bakayoko.

READ MORE: Ibrahimovic makes his intentions clear regarding Milan future – “Now I have to renew”