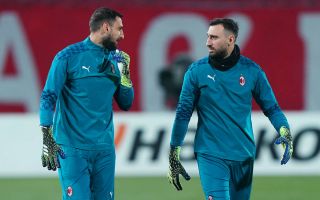 GdS: Goalkeeper almost certain to leave Milan in June as his renewal is off the table

AC Milan will discuss the renewal of Gianluigi Donnarumma in the coming weeks but his older brother looks almost certain to leave, a report claims.

The Rossoneri must resolve the situation regarding Gigio sooner rather than later given that his contract is set to expire in 98 days, though there is another side issue as Antonio’s deal will also run out on the same date.

He joined from Greece back in 2017 when his younger brother renewed his contract, arriving as part of the agreement and being the third-choice goalkeeper for pretty much the entire duration of his stay at Milan.

According to La Gazzetta dello Sport (via MilanNews), Milan want to renew Gianluigi Donnarumma’s contract at all costs, but for now the parties have not yet found an agreement. On the table there is only the extension of Gigio and not that of his brother Antonio, the paper confirms, so we is almost certain to leave on a free transfer.