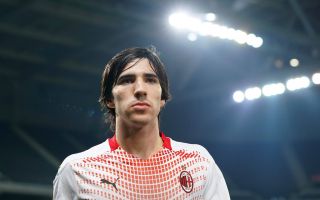 GdS: Huge opportunity for Tonali to silence doubters in Milan vs. Inter

During the clash against Red Star Belgrade, Ismael Bennacer picked up another injury and was forced to leave the pitch in the first half. As expected, he will miss out on the derby tomorrow and most likely a few more games.

Therefore, the responsibility will once again fall on Sandro Tonali to be the director of the Rossoneri, as Gazzetta Dello Sport highlight. ‘Now or never’, they titled their section about the young midfielder, who arrived from Brescia last summer.

Certainly, it will be a big chance for him to silence the doubters and get some pressure off his shoulders. He will play alongside Franck Kessie and although the latter is incredibly important, he doesn’t focus so much on the build-up play.

Tonali will be in charge of directing the play, in other words, and we all know what he’s capable of on a good day. We can only hope that he will put in a good performance tomorrow, as Milan sure will need him to play well.