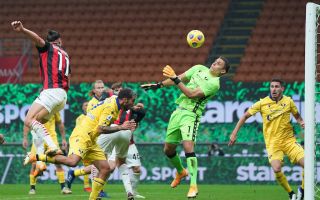 GdS: Ibrahimovic always decisive for Milan but one fact has become useless to ignore

It was a strange night for AC Milan striker Zlatan Ibrahimovic as he was decisive in the 2-2 draw with Hellas Verona in several different incidents.

As La Gazzetta dello Sport (via MilanNews) reports on Monday, the Swede missed the penalty in the middle of the second half to make it 2-2, hit the crossbar with a header, thought he had an assist for Davide Calabria that was ruled out by VAR, saw a shot saved by Silvestri then finally levelled with a 93rd minute header.

The paper claims that it is now useless to ignore the facts: if Zlatan does not perform well, the team struggle. Fortunately, the 39-year-old knows how to be decisive even in the less brilliant evenings.

Another peculiarity is the Ibrahimovic seems to have lost his touch from the penalty spot, with three failed attempts in the last four, including the one in the derby (even though he scored the rebound).

Even yesterday, however, Ibra set yet another personal record: with the goal scored against Verona he became the first Milan player ever to score in seven consecutive games in the league. For better or for worse, Ibrahimovic always affects the game.