GdS: Ibrahimovic and his students – Zlatan as the tutor of AC Milan youngsters

Zlatan Ibrahimovic’s importance for Milan cannot be underestimated. Being one of the main factors of the Rossoneri’s rise in 2020, the Swede will have the task of repeating and improving, starting from the new season, the work done in the last 6 months of the previous campaign.

According to Gazzetta dello Sport (via milannews.it), Ibrahimovic was and is the professor who changed Milan’s season (along with Stefano Pioli), giving courage and personality to his teammates and enhancing the entire team’s performance.

The 38-year-old attacker showed that he is a great motivator already in his first spell at the club, helping players like Nocerino or Boateng to get the best out of themselves.

Now his tasks will be to help the newcomers as well. The young signings Brahim Diaz and Sandro Tonali have great qualities, but with the influence of the Swede, they can perhaps reach an even higher standard.

In addition to these two players, Ibrahimovic will also pay special attention to four very young teammates: Colombo, Kalulu, Maldini and Roback. And the process has already started in pre-season against Novara and Monza. 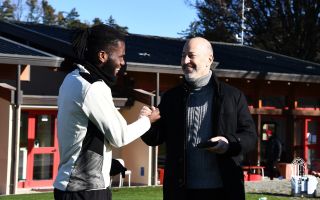 Photos: Kessie all smiles as he receives award for racking up 200 appearances from Gazidis
3 December 2021, 16:51
Serie A Standings