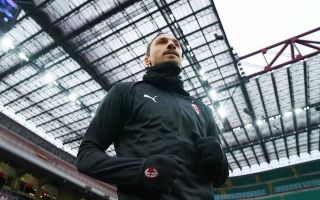 GdS: Ibrahimovic could play only 30 mins against Man Utd despite expectation he will start

There is some strange and rather conflicting news in the Italian media this morning regarding Zlatan Ibrahimovic’s role against Manchester United.

The paper are reporting that Ibrahimovic will start against United in the return leg of the Europa League last 16 tie, implying that he is indeed fit enough for a spot in the line-up despite doubts over his condition over the past few days.

However, they also report (via MilanNews) that the Swede could in fact have to settle for a rather limited role tonight, from a time point of view at least. Rebic and Leao’s problems – for whom today’s session will be decisive – could force Pioli to risk the 39-year-old from the start.

The striker was out against Roma due to injury, then he went to the Sanremo Festival, and according to the current rumours at Milanello it seems that he does not have more than 30-45 minutes in his legs for the game against United. Therefore, we can infer he would come off at half-time, at the latest.