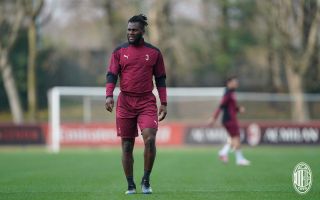 AC Milan have entered into the heart of negotiations over the renewal of midfielder Franck Kessie’s contract, according to a report.

This morning’s edition of La Gazzetta dello Sport (via MilanLive) takes stock of the situation surrounding Kessie, who currently earns €2.2m net per season on a deal until 2022. To extend his deal with the Rossoneri, Paolo Maldini and Ricky Massara initially offered around €4m-a-year, but were hit by a counter-request of €6m net per year.

Milan know they cannot lose him, and have increased their offer up to €5m plus bonuses, but it is still not enough and the gap between supply and demand must be filled. The feeling at the moment is that in the end Milan will offer the Ivorian the amount he wants.

The paper adds that Maldini, Massara and agent George Atangana are continuing their contacts over the phone with the hope of meeting soon in person, but all three will give nothing away about the negotiations, a sign of how we have now entered the very important phase of the deal.

READ MORE: Wolves and Milan in ‘advanced contacts’ over winger after €28m bid