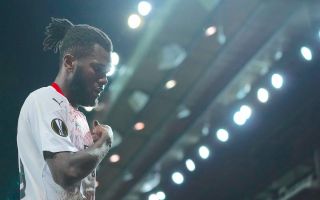 AC Milan must lock down the future of Franck Kessie sooner rather than later as some top clubs are beginning to circle, a report claims.

According to La Gazzetta dello Sport (via MilanLive), yesterday at Old Trafford the English journalists present highlighted the characteristics of Kessie, with many labelling him the man of the match during the 1-1 draw.

In the summer, a number of elite sides could knock on the Rossoneri’s door as at least two or three big English teams are very attracted to Kessie’s qualities, without forgetting Real Madrid who want the Ivorian as a midfielder for the future.

The Rossoneri value Kessie at no less than €50m – a figure intended to scare off any potential suitors, but what is urgent above all is the need to renew Kessie’s contract, as it expires in June 2022. The club are already moving, but it is necessary to speed up the times to prevent the Ivorian from being seriously tempted by international offers.