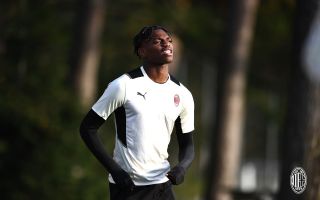 Rafael Leao will once again be called upon to provide a decisive performance during tonight’s game against Fiorentina, with a renewal soon set to follow.

This morning’s edition of La Gazzetta dello Sport (via TMW) confirms that head coach Stefano Pioli will rely on Leao again after Ante Rebic sustained a problem in training yesterday. He worked overtime before the international break but played less than half an hour for Portugal on national team duty, meaning he should hopefully be in good condition.

It has been a great season for Leao so far, as he has shrugged off the label of being inconsistent, already netting four times for the Rossoneri and making a big contribution to an attacking department that has fired the team to joint top. He seems perfect for the 4-2-3-1 system Pioli uses as he has a certain element of freedom out wide but can be direct, using his speed and dribble, plus the overlaps of Theo Hernandez.

Leao’s performances have not escaped the attention of the top European clubs, but there is no uncertainty on the horizon regarding his future. Milan are ready to reward the 22-year-old with new and improved contract, which will see him extend until 2026 and net a pay rise.