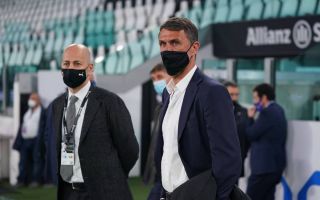 GdS: Maldini and Massara have four deals in mind if top four finish is achieved – the names

The AC Milan management already have four deals in mind should they qualify for the Champions League, according to a report.

La Gazzetta dello Sport – as cited by Calciomercato.it – reports that the first deal would be Gianluigi Donnarumma’s renewal as the goalkeeper’s green light is getting closer and closer. It is difficult to imagine that Milan will improve their offer from the current €8m net per season but white smoke could arrive through a bridge extension of one or two years.

Meanwhile, qualification for the next Champions League would bring between €50m and €60m to the club’s accounts that could be reinvested to improve the squad. In addition to Donnarumma, Milan should make permanent the stay of Fikayo Tomori for €28m.

Paolo Maldini is also ready to step up the pursuit of a new striker and Dusan Vlahovic remains the first choice target, with Gianluca Scamacca a potential alternative after a fabulous second part of the season. Finally, the club will talk with Real Madrid about keeping Brahim Diaz beyond the summer.