La Gazzetta dello Sport have caused a stir with their analysis of Maresca’s refereeing performance in last night’s game between Milan and Torino.

We must start with the front page, which reads as follows: “Milan go with VAR. Leaders back on track: +4. Toro beaten and furious. Maresca chaos: he changes his mind twice at the monitor.”

This is of course an insinuation that the Rossoneri were victorious thanks to the helping hand of VAR. It must be noted that Gazzetta is owned by RCS Mediagroup which Torino president Urbano Cairo is the chairman of.

The paper (via MilanLive) takes a look at the key incidents, beginning with the 22nd minute when Stefano Pioli was warned for his protests.

In the 32nd minute there was contact in the Torino area between Brahim Diaz and Andrea Belotti. The referee said no penalty at first but Guida called him to check the incident, and after a long review a penalty was given. The paper claims that Diaz was already falling and the contact with Belotti is minimal.

Five minutes into the second half Verdi went down in the Milan area after a clash with Tonali. For Maresca it was a clear penalty, but he was again called to review his decision. The referee cancelled the penalty, but the decision was debatable – as per Gazzetta – because although Verdi kicks the leg of the Rossoneri midfielder, Tonali was apparently leaning on his back.

Other serious errors included the yellow card given to Rafael Leao for alleged simulation, while from the replay it looks like a foul from Murru. It causes the Portuguese forward to be suspended against Cagliari.

In injury time, the returning Zlatan Ibrahimovic was also stopped for a non-existent hand ball. 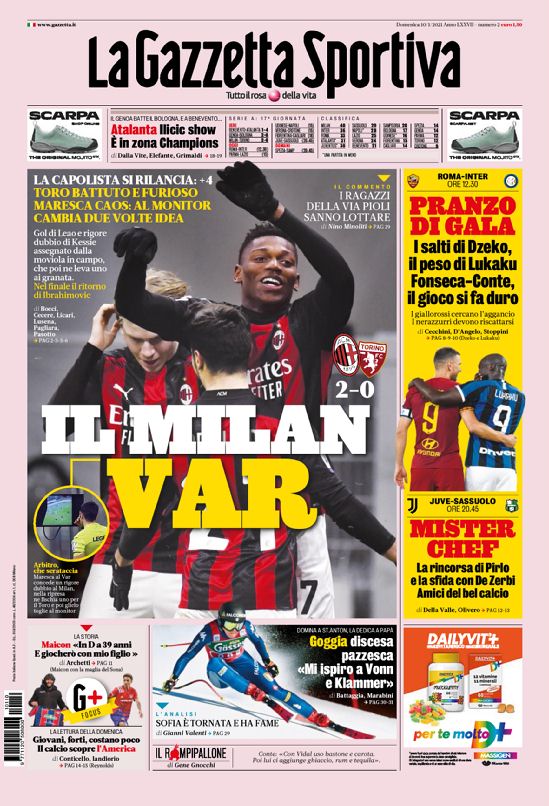