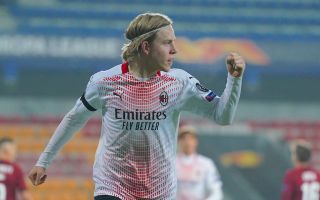 GdS: Milan and Hauge’s love story ignited on 24 September – how different it could have been

Since AC Milan already had the qualification in the bag, head coach Stefano Pioli fielded an experimental XI against Sparta Praha.

Pioli picked four players born after 1/1/2000 in the same match – namely Colombo, Maldini, Kalulu and Tonali – but he chose to rely Jens Petter Hauge on the left, who repaid his coach’s confidence with another great performance and another beautiful goal.

As La Gazzetta dello Sport reports (via MilanNews), the young Norwegian weaved past Wiesner with a nutmeg and then beat the Sparta Praha goalkeeper with a perfect right-footed shot that went into the corner. In addition to the goal, Hauge showed many other useful plays and also a great spirit of sacrifice in the defensive phase.

The more time passes, the more the Norwegian becomes important for Milan. The paper asks an interesting question though: what if the Rossoneri hadn’t drawn Bodo/Glimt in the third qualifying round?

Yes, Milan had scouted him for some time, but it is undeniable that his excellent performance in the Europa League preliminary at San Siro accelerated the negotiation, as we exclusively revealed at the time.

Perhaps, without that match, the streets of Hauge and Milan would not have met yet, but luckily things have gone differently and now the Rossoneri are enjoying their newest phenomenon.