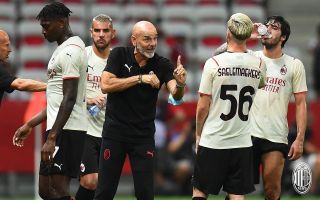 Milan boss Stefano Pioli is reportedly considering the idea of fielding a two-striker formation given who he has at his disposal.

According to this morning’s edition of La Gazzetta dello Sport (via MilanNews), Pioli is studying the tactical variant that would see Zlatan Ibrahimovic and Olivier Giroud playing up front at the same time as he believes the duo will certainly be able to play in a pair, certainly in some games at least.

The Rossoneri coach already has more than one solution in mind: Ibrahimovic could move behind Giroud, but he could also line the team up in a 4-4-2 formation. The Swede remains central to the club’s project but given he will turn 40 later this year, it is unknown how many matches he will play, and in this sense Giroud is very much a deputy.

The Frenchman knows how to adapt to the situation and Milan know they have signed a player who is ready to go when called upon, no matter what scenario. Pioli seems to want his side to be more tactically flexible than last season.