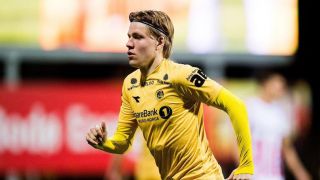 GdS: Milan have a very high chance of beating Man Utd to bargain winger deal in next few days

Milan are looking to wrap up a deal for Bodo/Glimt winger Jens Petter Hauge in the next few days after being dazzled by his performance, a report claims.

According to La Gazzetta dello Sport (via MilanNews), the Rossoneri already knew the 20-year-old very well, but his performance gave confirmation that he is worthy of a gamble.

Directors Maldini and Massara are working to try to close his arrival by 5 October, otherwise they will make a new attempt in January.

There is still a very high chance that the negotiation will be concluded in a very short time, the paper adds, and for Milan it would be a low-cost deal worth €2-3m, but they would have the chance to secure the performance of a very interesting young talent on which there are several top clubs, in particular Manchester United.

Among his admirers is his friend Erling Haaland, centre-forward at Borussia Dortmund. Milan certainly did not discover him on Thursday at San Siro, on the contrary they have been following him for some time because he has very interesting technical and tactical characteristics.

They see him as gifted with great technique, speed and dribbling skills, and the Norwegian is in fact able to fill any role in attack. Pioli would thus have one more alternative to his starters.