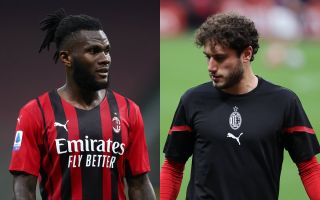 As Gigio Donnarumma has decided to leave Milan, the Rossoneri will have to find a new second-choice captain, seeing as Alessio Romagnoli doesn’t start that often. Then again, the latter could also leave the club.

In that case, Milan would have to find a new first-choice captain and as reported by Gazzetta Dello Sport, there are four candidates: Franck Kessie, Zlatan Ibrahimovic, Davide Calabria and Simon Kjaer.

Kessie, also known as Il President, seems to be the most logical option. He’s already a leader for the team, as the report described, and he was in fantastic form this past season. Both in the defensive and attacking phase, he is crucial for the club.

Then there is Ibrahimovic, who was the captain for 58 games in his first spell at the club. However, he most likely won’t play every game and that’s why Calabria and Simon Kjaer also are candidates for the armband.

The centre-back is already the captain for the Danish national team and has great experience, while the right-back grew up in the youth ranks of Milan and would be a nice symbol.