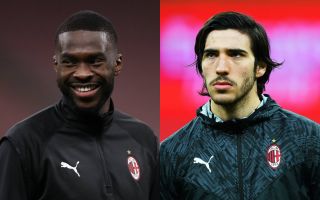 GdS: Milan have no doubts about redeeming €63m duo in the summer

Milan are already making plans for next season as they don’t want to be caught unprepared during the summer transfer window. In addition to some new faces, the Rossoneri will retain the strong players they have.

As reported by Gazzetta Dello Sport (via MilanLive), two players that will remain at the club are Fikayo Tomori and Sandro Tonali. They joined on the same formula, with a buy-out option that is, and Milan will redeem them in the summer.

Tomori, on loan from Chelsea, will cost the Rossoneri €28m and the Paolo Maldini is convinced that this investment is necessary. It’s hard to find another centre-back with the same quality for that price, which says a lot.

As for Tonali, Milan paid €10m to Brescia for the loan and will have to pay €15m to redeem the midfielder. There is also an additional €10m in bonuses in the deal, but the Rossoneri have no doubts about the redemption.