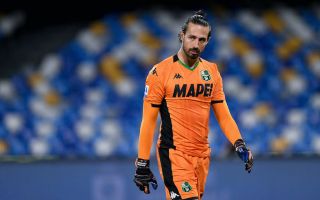 AC Milan are in the hunt to improve the squad at Stefano Pioli’s disposal. Some arrivals have already been completed, like Brahim Diaz or Pierre Kalulu, while Sandro Tonali is expected to sign with the Rossoneri this week. But the club is also looking for a backup goalkeeper to Gianluigi Donnarumma.

At the moment, the only two goalkeepers in Pioli’s team are the Donnarumma brothers and the signing of a second goalkeeper to serve as a backup to Gianluigi is one of the management’s priorities.

As reported by Gazzetta dello Sport (via milannews.it), the names on the table are Andrea Consigli (Sassuolo), Marco Sportiello (Atalanta) and Asmir Begovic (Bournemouth), who already played for the Rossoneri on loan in the second half of last season.

For the Sassuolo goalkeeper, there was just an exploratory inquiry, while for Sportiello the situation needs to be clarified with regards to the recovery of Pierluigi Gollini, Atalanta’s starting goalkeeper. Begovic, meanwhile, is demanding a higher salary than the Rossoneri are currently willing to offer.