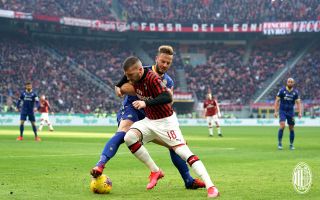 AC Milan are considering making a move to sign winger Ante Rebic on a permanent basis this summer, a report claims, 12 months before his loan expires.

After being almost mysteriously distant in the first part of the season, Rebic is now an important element of Stefano Pioli’s Milan. From the beginning of 2020 onwards, the Croatian international seems to be another player and in recent weeks Pioli has often been preferring him to Rafael Leao.

However, his future is a puzzle still to be solved. As La Gazzetta dello Sport explains (via MilanNews.it), both Rebic and Silva will return to Eintracht Frankfurt and Milan respectively at the end of next season as things stand, as the deal was a simple two-year dry loan exchange with no options or obligations to buy inserted.

Despite this, given the excellent upturn of Rebic, Milan are already thinking of inserting an option that can be exercised at the end of this season or in 18 months (June 2021).

Behind this idea is the intention on Milan’s part of not wanting to enhance a player who is not owned by him. In the summer, there was talk of an evaluation of both players around €25million, but no figures were inserted so the two clubs would have to sit again at the table and find an agreement.

It is not excluded that Eintracht would want to include a purchase option for André Silva who scored his fourth goal of the season in the last Bundesliga round.