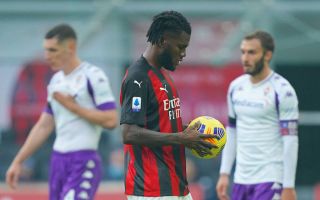 GdS: Milan in talks over renewal of Kessie as agent pushes for a salary increase

Franck Kessie wants to extend his contract with AC Milan and his agent is pushing for a pay rise, according to a report.

The Ivorian has exploded over the past few months and has become one of the best midfielders in Serie A alongside Ismael Bennacer.

As La Gazzetta dello Sport report this morning (via MilanLive), Milan want to keep hold of Kessie for as long as possible, and the fact his contract expires in June 2022 means there is some urgency to try and avoid another Calhanoglu situation.

The management’s idea is to find an agreement over a renewal in the coming months, so as to remove any possible threat from clubs who are interested in the former Atalanta man.

The player’s agent is pushing for a pay rise from the current €2.2million net per season that his client earns. Contacts between the parties have been initiated and Kessie’s will is clear: to stay at Milan.

Milan also intend to continue with the 23-year-old, even if it will take some time to find an agreement on the salary increase, while for now the club have the renewals of Gigio Donnarumma and Hakan Calhanoglu as a priority.