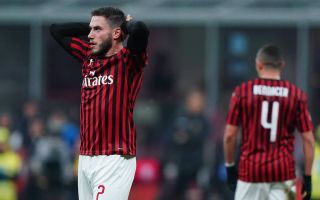 Milan are looking for a new right-back on the market, keen on reinforcing the squad ahead of the upcoming season. However, in order to bring in a new player, they also have to offload one of their current ones.

Between Davide Calabria and Andrea Conti, as reported by Gazzetta Dello Sport (via MilanNews.it), the Rossoneri have decided to sacrifice the former. Seeing as Conti has played a lot since Stefano Pioli’s arrival, it’s not exactly a surprise.

Furthermore, Calabria would guarantee a full capital gain as he came through Milan’s youth academy. The same can’t be said for Conti as the Rossoneri paid €24m to bring him in from Atalanta in the summer of 2017.

Per the newspaper, Milan have slapped a price tag of €12m on Calabria. As added by Tuttosport (via MilanNews), the defender could end up in Spain as Real Betis have a concrete interest in him. No offers have arrived yet, though.