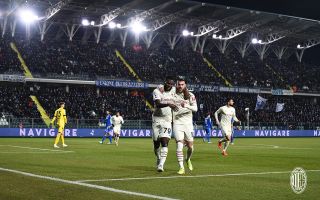 This morning’s edition of the newspaper La Gazzetta dello Sport is full of praise for plenty of AC Milan players after last night’s 4-2 win against Empoli.

The paper (via MilanLive) gives Franck Kessie the title of man of the match as he was used as an attacking midfielder to great effect, worthy of a 7.5 rating after a decisive brace. The same score went to Alexis Saelemaekers who was placed on the left for the first time and had a hand in every goak.

A 7 went to Theo Hernandez who returned from an absence due to flu and seems to be reborn, scoring the fourth goal. Alessandro Florenzi got a 6.5 for another convincing outing at right-back and a beautiful free-kick.

A lot of players got a 6 including Mike Maignan who was not exempt from blame on Bajrami’s goal. Fikayo Tomori and Alessio Romagnoli got away with some things but both got the same score, as did the Sandro Tonali and Ismael Bennacer double pivot.

A 6 was also given to Junior Messias and Pierre Kalulu who came off the bench, and Olivier Giroud got a pass too, but the worst score went to Tiemoué Bakayoko again. He conceded a penalty for a handball and got a 5 out of 10.