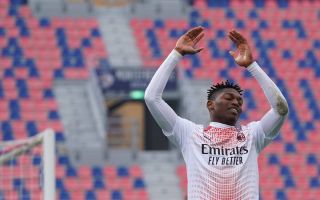 Milan bounced back from two consecutive wins yesterday as they managed to beat Bologna way from home. Goals from Ante Rebic and Franck Kessie were enough to keep the home side away, securing three important points.

The Rossoneri didn’t have the best of games but worked hard on the pitch, getting the job done after what had been a difficult week. With the win, and several key players returning, things are looking up for the team.

Gazzetta Dello Sport (via SempreMilan) took a closer look at the players’ performance and gave them all a rating out of ten. Gigio Donnarumma, Rafael Leao (MOTM) and Zlatan Ibrahimovic were the best on the pitch with 7.

The Swede missed a penalty but was still very important for the team, as the newspaper highlights. Davide Calabria, Fikayo Tomori, Franck Kessie and Ante Rebic came in on second with 6.5, all performing on a good level throughout the game.

It was Tomori’s debut from start, having joined from Chelsea last week, and he didn’t exactly disappoint. The rest of the Milan players, that is Alessio Romagnoli, Theo Hernandez, Alexis Saelemaekers, Ismael Bennacer, Rade Krunic and Mario Mandzukic all passed the test with a 6.

One man, however, was criticised by the newspaper: Sandro Tonali. The youngster is yet to find his place on the pitch and didn’t look great, earning a rating of just 5. It’s difficult to imagine him as a starter in the future.