GdS: Milan player ratings for defeat against Atalanta – Star duo among the worst

Milan didn’t live up to their usual standards last night as Atalanta scored three goals at San Siro. A bad defeat for Stefano Pioli’s men, who didn’t exactly get a lot of praise in the newspapers this morning.

Gazzetta Dello Sports (see photo) dissected the Rossoneri’s performance and gave a rating to each player (out of 10). The highest that someone got was 6, and that doesn’t really happen that often, which says everything about the loss.

Gigio Donnarumma, Simon Kjaer and Mario Mandzukic were all given 6, with the former chosen as the MOTM for Milan. A decent rating, but nothing more, which you wouldn’t expect from a performance like last night that had no standouts.

Hernandez was chosen as the FOTM for Milan, which is understandable. The Frenchman tried to break the lines with his trademark run but failed every single time. He needs to up his game a lot in the big games, it seems. 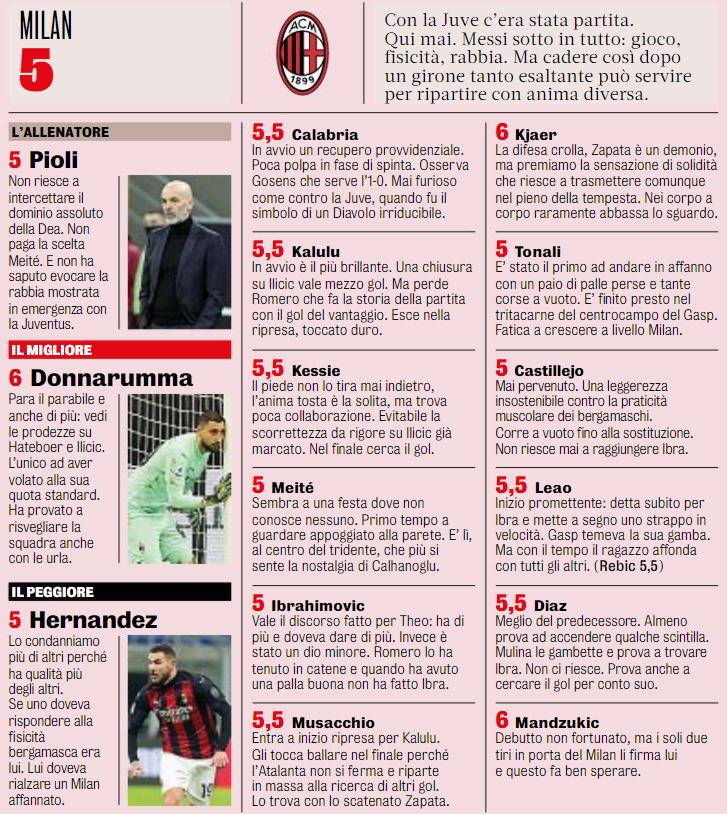 Tags AC Milan Atalanta Serie A theo hernandez
Related Articles
Krunic honest in assessment of Milan’s collapse: “Something is not like before”
5 February 2023, 23:45
Sky: Pioli not at risk but Milan directors approached dressing room with ‘gloomy faces’
5 February 2023, 23:33
Pioli believes Milan are not yet ‘mature’ as he explains formation and selection choices
5 February 2023, 23:28
Serie A Standings