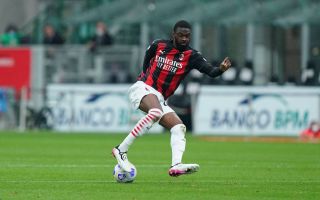 It was another San Siro disappointment for Milan last night as they suffered a damaging 2-1 defeat to Sassuolo.

La Gazzetta dello Sport (via PianetaMilan) have given Hakan Çalhanoğlu a 7 out of 10, describing the midfielder as ‘the beacon that guides the team’ and scoring a fantastic goal in the process.

A rating of 6.5 went to Gianluigi Donnarumma as he made saves on Boga and Haraslin, but he could not really do much when Raspadori came on and scored twice. Pioli got a 6 as he ‘designed the game well’ with a good pressing game, but with some questionable changes.

Davide Calabria, Simon Kjær, Franck Kessié and Alexis Saelemaekers all got a 6. A 5.5 went to Diogo Dalot who ‘had a good start, then when Berardi becomes a protagonist he goes into trouble’. Soualiho Meïte received the same as ‘in the construction phase he offers nothing at all’.

Ante Rebić got a 5.5 too, as did Mario Mandžukić who did not make a mark in his 20 minutes. Finally, scores of 5 went to Fikayo Tomori, Rade Krunić and Rafael Leão.