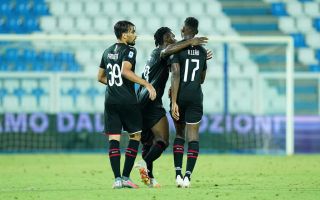 AC Milan were clear favourites for the game against SPAL, but two early goals from the home side quickly changed the situation for the Rossoneri. In the end, they managed to find an equaliser but two important points were dropped.

Today’s edition of Gazzetta Dello Sport, as cited by MilanNews.it, has rated Stefano Pioli’s men and their performances. Rafael Leao was voted the MOTM with a rating of 6.5, coming in with ‘very clear’ ideas and getting on the scoresheet.

Alexis Saelemaekers, Hakan Calhanoglu and Lucas Paqueta also got this rating as they were considered the standouts of the game. Meanwhile, Gigio Donnarumma, Samu Castillejo and Diego Laxalt were rated at 6.

The rest, as explained by the newspaper, were disappointments. 5.5 for Theo Hernandez, Davide Calabria, Ismael Bennacer and Jack Bonaventura. Matteo Gabbia and Ante Rebic got half a point less, making some crucial mistakes.

However, the worst was Franck Kessie, who is to blame for both of SPAL’s goals. He was given a 5 by the newspaper.