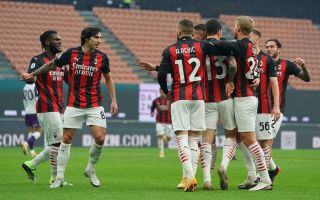 Gianluigi Donnarumma was among the players to be praised for his performance during Sunday’s 2-0 win over Fiorentina by La Gazzetta dello Sport’s player ratings.

The paper (via PianetaMilan) gave Donnarumma a score of 7.5 out of 10, highlighting the saves he made to deny Dusan Vlahovic and Franck Ribery in particular in order to earn another clean sheet.

The stand-in head coach Daniele Bonera got a score of 7 out of 10 as Milan once again showed that they can cope with Zlatan Ibrahimovic, playing high intensity football with dynamic movements and a solid base.

Davide Calabria, Alexis Saelemaekers and Alessio Romagnoli were all also praised as they got a 6 out of 10, with a fantastic comment regarding the Belgian winger.

“The principle of his surname contains something similar to the English verb ‘to sail’. The boy from Belgium spins away like the wind, generates gusts of the mistral.”

A number of players got a 6.5 including Simon Kjær, Theo Hernández and Franck Kessié who only ‘got half a vote less for the missed penalty”. Hakan Çalhanoğlu also got a 6.5 and was unlucky not to score, instead striking the inside of the post.

A score of 6 was awarded for the performances of Sandro Tonali, Ante Rebić and Rade Krunić. The former Brescia midfielder is “quite anonymous to the touch, he makes himself heard when recovering the ball, but it’s not him yet. Or rather, he is not yet the player we think he can become”.

The only player who was scored below the baseline of 6 was Brahim Díaz, who received a rating of 5.5 and was described as ‘a bit confused’.

“We appreciate the good will, the desire to get on the ball. But the point is missing. He did not trigger the added value of his technique, which he possesses in abundance,” the paper said.