Ismael Bennacer was AC Milan’s best player on the pitch for the draw against Lille while the others were decidedly average, according to La Gazzetta dello Sport.

According to the paper, Bennacer was worth a score of 6.5 out of 10 as the Algerian did everything well, both in the defensive phase and in the build-up phase, however he was marked down for falling asleep for the equaliser.

Samu Castillejo was praised for the first time this season too, as the Spaniard scored the goal again and finally showed that he can be useful and incisive in the right situations.

There were a lot of 6s handed out, such as to both centre-backs Kjaer and Gabbia as well as Tonali, who struggled a bit under the intensity of Lille’s press again. It was a 6 too for Rebic, still not at the top but decisive in front of goal.

The duo who were marked down with scores of 5.5 are Dalot and Hauge. They did not convince much as both committed avoidable errors and showed some decisive uncertainty. Not even Calhanoglu shone, as he got a 5.5 too. 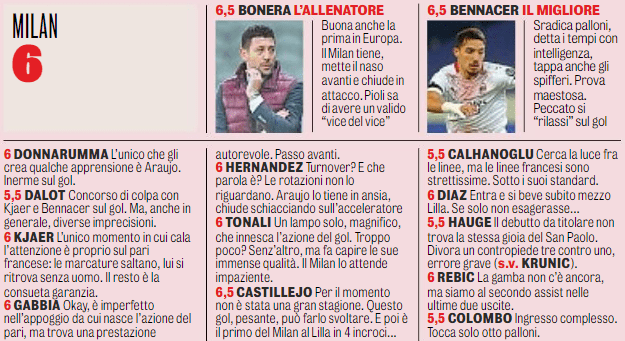