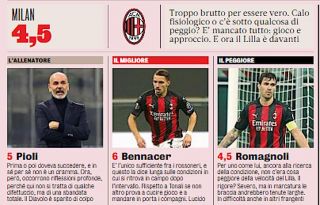 GdS: Milan player ratings for loss against Lille – Romagnoli and Tonali among those slated

Not many players escaped the wrath of La Gazzetta dello Sport’s player ratings after Milan were humbled 3-0 by Lille at San Siro.

Ismael Bennacer was the only player for the Rossoneri who registered a score of 6 or higher, as the Algerian came on in the second half and at least injected some energy into a lethargic performance.

Kjaer can hold his head high as he got a 5.5 while Rafael Leao got the same as he endeavoured after coming on but missed a big chance. Brahim Diaz and Castillejo both got a 5.

The three worst players on the pitch got a rating of 4.5 out of 10, primarily captain Romagnoli who was described as ‘slow and naive, especially on the occasion of the penalty’. Sandro Tonali got the same score as he was dominated by the quality and strength of Renato Sanches, while Rade Krunic was invisible.

Most of the team got a 5, such as Gianluigi Donnarumma who flapped at the second goal and Zlatan Ibrahimovic whose European struggles continue.

Dalot was also bad after an excellent performance against Sparta on the left side. He is described as having had a ‘defensive disaster’ and looking ‘lost’.