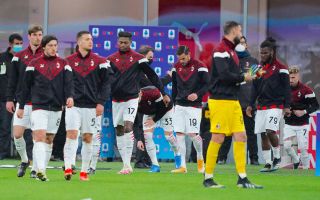 It was a night to forget for most AC Milan players during last night’s 1-0 defeat to Napoli, and La Gazzetta dello Sport’s player ratings show it.

The paper (via MilanLive) gave a 6.5 to Fikayo Tomori who was the best of the bunch for the Rossoneri, looking like a ‘veteran’ and not giving anything away. He seems to be the one undroppable player of the rearguard at the moment.

A 6.5 was also given to Gigio Donnarumma, who kept Milan in the game with a great save on Fabian Ruiz. A score of 6 and therefore a sufficient performance was given to Tonali, who covered Kessie’s back well on an off night, while substitutes Brahim Diaz and Saelemaekers got the same for their endeavour.

Gabbia, Theo Hernandez and Kessie got a 5.5 as in particular the Ivorian disappointed based on recent performances, but the fatigue was widely felt. A 5 was given to Dalot because of the serious mistake that led to the Napoli goal. Ditto for a dull Leao, Krunic who was never in the game plus Calhanoglu (not in shape) and Castillejo.

The worst, however, is undoubtedly Ante Rebic who got a 4.5 for coming off the bench, doing very little aside from a nice cross to Leao and getting sent off for insulting the referee.