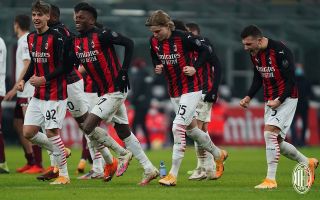 GdS: Milan player ratings for Torino win – duo praised but four players are off the pace

Davide Calabria has drawn praise for his performance during last night’s win over Torino on penalties in La Gazzetta dello Sport’s player ratings.

The paper (via PianetaMilan) has given Calabria a 7 out of 10 for a reliable performance in the midfield – not his natural position – and the fact he was so close to giving Milan the lead when he hit the post.

Head coach Stefano Pioli got a rating of 6, with only one shot on goal in the entire first half reflecting the difficulty of the match as the Rossoneri were not at their usual pace.

Ciprian Tătărușanu scored a 7 for his decisive penalty save but also an assured performance in the 120 minutes prior, with Pierre Kalulu getting a 6.5 for another superb performance at right-back and when moved to centre-back.

It was the same vote for Diogo Dalot and for Hakan Çalhanoğlu, the former having grown into the game and the latter making an impact in creativity when coming off the bench.

Finally, Jens Petter Hauge got a 5 with the paper remarking that his specialty for now is entering the game in progress after a ‘soft and unconvincing’ approach.