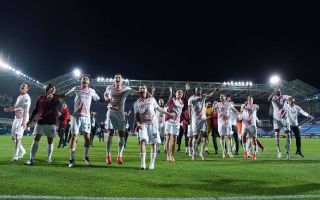 GdS: Milan player ratings for win over Atalanta – lots of praise as midfielder gets a 9

A number of AC Milan players received high praise for their performance during Sunday’s crucial 2-0 win over Atalanta.

This morning’s edition of La Gazzetta dello Sport (via MilanLive) starts by heaping praise on Franck Kessie who got a score of 9 out of 10 for his match-winning brace from the penalty spot and for another excellent performance in midfield, proving he is among the best midfielders in Europe.

A vote of 7 went to Theo Hernandez and Calhanoglu, both decisive against Atalanta. The Frenchman caused panic with his runs and The Turk also sacrificed with his performance. Alexis Saelemaekers got a 7 too as his pass put Theo through for the first penalty, and he was his usual energetic self.

A score of 6.5 was given to Calabria and Kjaer, now certainties in the back four thanks to amazing bounce-back seasons, while substitutes Dalot and Meite got the same as they proved to be reliable and concrete.

Donnarumma got a 6 as he was not very busy, while Tomori, Brahim Diaz and Rafael Leao got the same. The only player to drop under a 6 was Ismael Bennacer as the paper gave him a 5.5 for the many errors in possession.