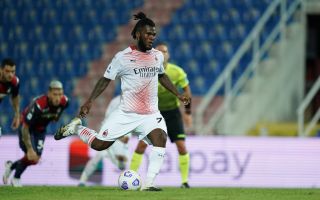 GdS: Milan player ratings for win vs. Crotone – Kessie the engine but Bennacer is criticised

AC Milan midfielder Franck Kessie was the best player on the pitch during the 2-0 win over Crotone on Sunday, according to La Gazzetta dello Sport.

The Ivorian got himself on the scoresheet with a superbly taken penalty just before half-time and was generally very dominant in the midfield, as we have grown accustomed to over the past few months.

La Gazzetta (via MilanNews) noted this, stating that Kessié was the best on the field against Crotone. He scored a 7 out of 10 for his performance as he was labelled the ‘real engine of Milan’.

There were excellent performances also from Calabria, Kjaer, Hernandez, Tonali, Saelemaekers and Calhanoglu, who each received a 6.5.

It was the same score for the author of the second Rossoneri goal, Brahim Diaz, who grew in the second half and “scored a goal as a striker would”.

There were marks of 6 for Donnarumma, Gabbia, Rebic, Castillejo and Calhanoglu, while Ismael Bennacer was the only player marked down as the Algerian (rating 5.5) “didn’t get into the game well”.