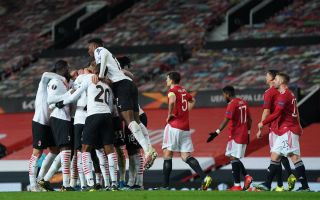 A number of players have drawn praise in La Gazzetta dello Sport’s ratings after last night’s draw against Manchester United at Old Trafford.

The paper (via MilanLive) gave the highest scores to the ‘K Factor’ of Franck Kessie and Simon Kjaer who both scored a 7.5. The Ivorian proved himself as being omnipresent and omnipotent, even ending up as a centre-forward, while the Dane was the ‘Ibrahimovic of the defence’ and scored a late equaliser.

A score of 7 was given to Soualiho Meité as the performance of the Frenchman was rewarded. He imitated Kessie in many respects and helped to dominate the Manchester United midfield.

The performances of Saelemaekers and Brahim Diaz were very positive as they put their opponents in difficulty with their dynamic and fast movements, scoring a 6.5, while the same went to Davide Calabria and Rade Krunic – both in the thick of the game constantly.

A 6 went to Gianluigi Donnarumma and Fikayo Tomori, who were good aside from a fatal misunderstanding for Diallo’s goal. Dalot got the same, as did substitutes Kalulu, Tonali and Castillejo. Rafael Leao’s performance earned a 6 too, as he was evanescent in attack but won the corner late on with some excellent work.