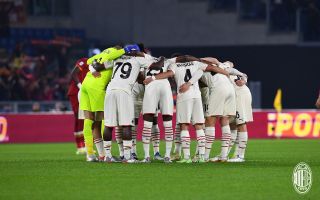 A number of AC Milan players have drawn praise from the media this morning for their part in the 2-1 win over Roma at the Stadio Olimpico.

This morning’s edition of La Gazzetta dello Sport (via MilanNews) carries their player ratings from the game in the capital last night, during which Zlatan Ibrahimovic scored the opening goal and won the penalty which allowed Franck Kessie to make it 2-0, before Theo Hernandez’s red card and El Shaarawy’s late goal made it a nervy conclusion.

Ibrahimovic got an 8 out of 10 from the paper as he was the best player on the field, while centre-back Simon Kjaer got the same score as he was ‘dominant’ at the back for Stefano Pioli’s side. There was an excellent performance from Davide Calabria (7.5), as well as Ciprian Tatarusanu, Ismael Bennacer and Franck Kessie (who got a 7).

A 6.5 rating went to Fikayo Tomori and Rafael Leao, with a 6 going to Rade Krunic, Alexis Saelemaekers and the subs. The only negative score (5) was for Theo Hernandez for his red card.