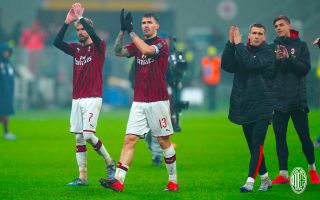 Alessio Romagnoli and Ante Rebic were the best players for the pitch during Milan’s win over Torino on Monday, according to La Gazzetta dello Sport.

It was a bit of a wasteful performance from the Rossoneri at San Siro, however they obtained the victory thanks to a first half effort from Ante Rebic beating a struggling Granata side 1-0.

The newspaper (via MilanNews) have given their player ratings for the game, starting with the match-winner Rebic who scored a 7/10. Romagnoli also had an ‘excellent’ performance and ‘gave very little to Belotti’.

Matteo Gabbia – making his Serie A debut for Milan – was also given a 7 as the author of a ‘perfect game’, while Ismael Bennacer received a 6.5.

The only ones to score below that were Davide Calabria and Lucas Paqueta (5.5 rating for both), as the full-back defended badly and was worse going forward, while the Brazilian was ineffectual.