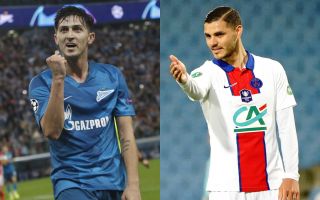 Milan are currently evaluating their options with regards to the attack, as Zlatan Ibrahimovic still has some work to do before he can return to training again. Two targets have been highlighted by the media this morning.

According to today’s edition of Gazzetta Dello Sport (via MilanNews), the situation very much depends on the recovery of Ibrahimovic. If he can’t make it back for quite some time, then Milan would need an immediate solution.

One of the potential signings, if so, is Zenit striker Sardar Azmoun. The Iranian international has 45 goals in 64 league games for the Russian side, which is impressive. There have already been contacts, but the Milan directors are stalling.

Should Ibrahimovic recover without issues, then the Rossoneri could decide to go with a last-minute opportunity instead. That could be Mauro Icardi, who could arrive on loan if PSG agree to pay part of his salary.

Both signings, whichever materialises, would be in addition to the arrival of Olivier Giroud. Unlike this past season, the Rossoneri don’t want any struggles up front.