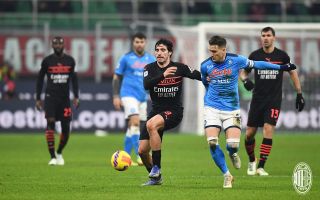 This morning’s edition of La Gazzetta dello Sport did not pay many compliments to the Milan players after their performance against Napoli last night.

The paper (via MilanLive) has Fikayo Tomori as the best of the bunch for the Rossoneri as he got a 6.5 for a ‘combative match, as a lifesaver for the defence’. A 6 was awarded to Mike Maignan, Alessandro Florenzi and Alessio Romagnoli in the defence, while the same mark went to Junior Messias and Alexis Saelemaekers, the latter of whom came off the bench.

Zlatan Ibrahimovic and substitute Olivier Giroud were only worty of a 5.5 in the eyes of La Gazzetta because they showed little movement, some aerial battles but above all very little danger. Fode Ballo-Touré got the same as the drop-off from Theo Hernandez was evident, while Bennacer and Castillejo came on and offered little.

The midfield struggled as Sandro Tonali ran less than usual and was imprecise and chaotic, getting a 5 out of 10, while Franck Kessie is ‘a distant relative of the dominant player from half a year ago’. Rade Krunic got a 5 as did Brahim Diaz as both made mistakes while failing to affect the game.

READ MORE: Why Massa disallowed Kessie’s equaliser and the doubts regarding the decision