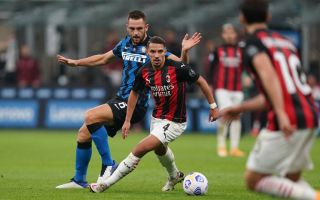 AC Milan will welcome back a vital cog in their midfield as Ismael Bennacer will finally return from absence this weekend, a report claims.

Bennacer shook off his muscle problem last week but was unavailable for the game against Crotone at San Siro due to the fact he had a fever and bronchitis.

Today’s edition of La Gazzetta dello Sport (via MilanLive) confirms that the Algerian will be back from the first minute on Saturday night as Milan visit Spezia for the first time in their history in Serie A.

The paper also takes a look at what Bennacer brings compared to the presence of Tonali and Meité. With the former Empoli star on the pitch Milan have won 59% of their matches since the beginning of the 2019-20 season, when he was signed.

During the current season the 22-year-old he has recovered 65 balls at an average of 6.5 per game, which is a lot higher than the 3.95 for the average central midfielder in the league. He boasts 425 successful passes or 42.5 per game, again double the average (25.54).

He will never be an out and out playmaker, but the fact he has 154 forward passes at 15.4 per game shows how important he is in the build-up phase too, given the average for his role of 8.83.

With Bennacer on the pitch, his team-mates will welcome back his technical ability, tenacity and his ability to spring attacks at any moment.