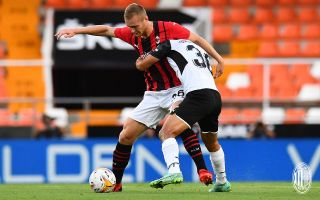 GdS: Milan reflecting on future of midfielder and could abandon pursuit of Chelsea outcast

Tommaso Pobega is working hard to try and adapt to the new role given to him by AC Milan head coach Stefano Pioli, according to a report.

As La Gazzetta dello Sport points out (via MilanNews), Pobega is not a traditional holding midfielder, but a mezzala, meaning he is more comfortable in a three-man midfield than a double pivot. However, he is working a lot to get used to the new role that Pioli has entrusted him with – as part of the double pivot – and it has made the management consider the idea that he could be a useful fourth midfielder.

A bigger sample side will be needed like on Sunday, for example, when he will be able to play against Real Madrid, but the club are seriously reflecting on what to do and in the end it is possible that they keep the 22-year-old around and abandon their pursuit of Chelsea’s Tiemoue Bakayoko.

READ MORE: Attempting to create the best XI of Galliani signings from his 31-year era at Milan