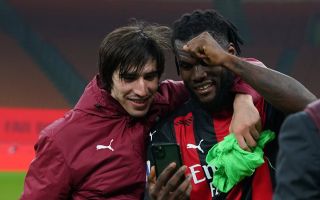 GdS: Milan smile as Kessie and Tonali will partner up – exactly what Pioli wants

Sandro Tonali has started the season in the best way possible, with two good games and a wonderful free-kick goal. Therefore, his starting spot for tomorrow’s clash is certain, but he will have a new partner.

As reported by Gazzetta Dello Sport (via MilanNews), Franck Kessie will start in the midfield tandem with Tonali. Stefano Pioli is in safe hands, in other words, given the qualities of the two players.

They played together a lot last season as well, although it was mostly due to the injury struggles of Ismael Bennacer. On paper, it looked like a very good midfield but Tonali was disappointing in his first season with the Rossoneri.

Now, however, things have changed and the youngster is looking fantastic. The outcome of the tandem should thus be better this season and it will be interesting to see them together once again. With that said, it’s up to the test for Tonali.

READ MORE: Milan have a mountain to climb in seven days – from Lazio to Juve