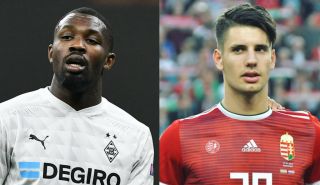 GdS: Milan target €55m Salzburg and Monchengladbach duo ahead of next summer – the details

AC Milan are already thinking about next summer’s transfer campaign in addition to the January transfer window, a report claims.

Wednesday’s edition of the newspaper La Gazzetta dello Sport (via MilanNews) reports how Milan are in the market for a new centre-back as soon as the window reopens, with two targets in mind and a fixed budget set.

However, the paper goes on to claim that Paolo Maldini and Ricky Massara have already cast their minds towards next summer and are thinking of two possible options to reinforce the attacking department too.

The topical name is that of Red Bull Salzburg playmaker Dominik Szoboszlai, a player the club have tried to sign already and who has a €25m release clause. Milan are preparing an assault for June.

Meanwhile, the paper goes on to claim that their German sources have reported Milan are interested in striker Marcus Thuram from Borussia Monchengladbach, son of the former Juventus defender Lilian.

The 23-year-old is currently valued at €30million and there are several top European clubs on him, and it would only be possible if Milan were to qualify for the Champions League.