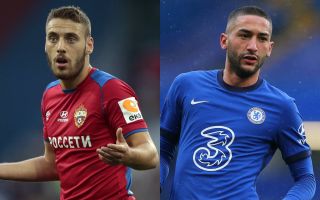 Milan aren’t just looking for a playmaker on the market, but they could also reinforce the squad with a new right-winger. Samu Castillejo and Alexis Saelemaekers haven’t been that prolific, forcing the Rossoneri to act.

According to Gazzetta Dello Sport, as cited by MilanNews, Paolo Maldini and Ricky Massara have set their sights on Nikola Vlasic for the playmaker role. They want him on a loan with an option to buy, but CSKA Moscow are demanding a permanent deal.

The price tag is set at €30m, which is considered too high by the Rossoneri, but there is still time to negotiate and bridge the gap. As for the right-win, the man that tops the wish list is Hakim Ziyech, who might be able to leave Chelsea on loan.

The Moroccan isn’t one of the key players in London and could struggle with playing time this upcoming season. Therefore, towards the end of the transfer window, Chelsea might change their mind and be open to a loan.

READ MORE: Milan’s strategy to secure Santos star will depend on the competition