GdS: Milan’s probable XI for Cagliari – Ibrahimovic to start as 4-3-3 is abandoned

AC Milan head coach Stefano Pioli will ditch the 4-3-3 he has used exclusively during his time at the club for Saturday’s trip to Cagliari, a report claims.

The Rossoneri face the trip this weekend to a historically happy hunting ground to face a team currently sat in the final European spot, seven points ahead at present.

Milan managed to stop the bleeding from the 5-0 defeat away in Bergamo against Atalanta before Christmas by drawing 0-0 against Sampdoria on Monday, but it still felt like two more dropped points for Stefano Pioli’s side.

According to Friday’s edition of La Gazzetta dello Sport, Pioli will mix it up by switching from the usual 4-3-3 to a 4-4-2 formation which will see the same back four and of course Gianluigi Donnarumma in goal.

A central midfield pairing of Franck Kessie and Ismael Bennacer will be flanked by Hakan Calhanoglu on the left and Samu Castillejo on the right, while Rafael Leao and Zlatan Ibrahimovic will be trialled as a two-striker pairing. 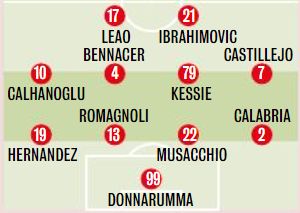