AC Milan are preparing for their clash against rivals Inter on Saturday night, and La Gazzetta dello Sport have predicted the line-ups.

The Rossoneri have amassed six points from their opening three games of the season, following up a 1-0 away defeat against Udinese with back-to-back wins by the same scoreline against Brescia (H) and Hellas Verona (A).

Attention has now turned to the crunch clash against the Nerazzurri at San Siro this weekend, with Antonio Conte’s side having won all three of their fixtures thus far.

The two big question marks regarding Milan’s team for the game appear to be at left-back and in behind Krzysztof Piatek.

La Gazzetta dello Sport(via MilanNews) claimed on Tuesday that Theo Hernandez will indeed be fit enough to start the game, but Giampaolo still believes that the Frenchman must ‘fix some movements’ and thus Ricardo Rodriguez should get the nod.

Meanwhile, the paper predict Ante Rebic to take Lucas Paqueta’s spot in the line-up alongside Suso supporting Piatek, who netted the winner on Sunday night.

Below is the graphic of the predicted starting XIs for both sides, as tweeted by @teammilanac. 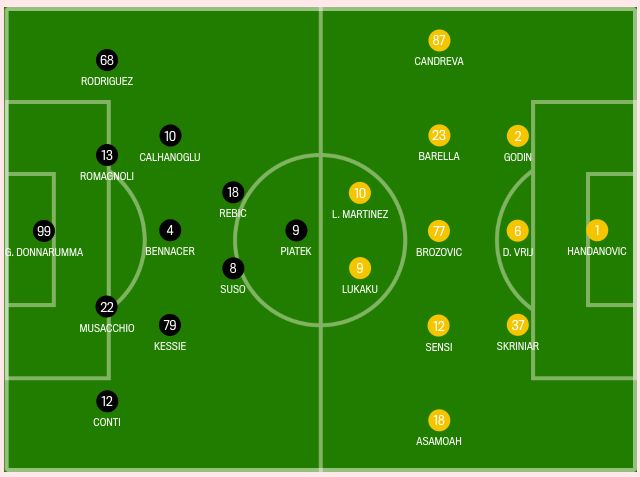