On the eve of the clash between Torino and AC Milan, Gazzetta Dello Sport have released their predicted line-ups for both sides (see photo below). However, based on it, a lot of Rossoneri fans will be disappointed.

Reports from Corriere Dello Sport (via SempreMilan.com) last night claimed that the manager was ready to make three changes, fielding Calabria, Hernandez and Bennacer from start. According to Gazzetta, though, only one change will be made.

Calabria will return from suspension, while Rodriguez is set to keep his spot on the left despite his terrible performance in the derby. Therefore, Hernandez will be on the bench once again, even though he performed well against Inter.

The most notable decision relates to the midfield, as Giampaolo is expected to opt for Biglia rather than Bennacer for the deep-lying role, which has been a big talking point since the start of the season, really.

Up front, the manager could decide to change the shape, starting Suso behind Leao and Piatek rather than the more conventional trio. However, once the game is underway, one can expect this to differ. 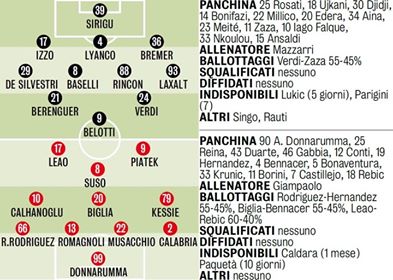